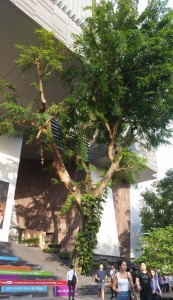 Many students in the School of the Arts (SOTA) in Dhoby Ghaut would be familiar with the big tree that protrude out of their stone steps. Despite being a matured tree, it has outgrown its original height and can now be seen creeping up to the 5th storey of the school building.

Estimated to be more than 60 years old, this grand old tree was spared alongside a Bodhi tree in the construction of the school. Founding principal Mrs. Rebecca Chew had proposed to keep the tree to preserve some greenery for SOTA, which being a school in the city centre, had no field.

In 2010, a branch fell off the tree, but thankfully did not hurt anyone. As Mrs. Rebecca Chew remembers, the fire engine that arrived on scene that day sank into the pedestrian pathway, because the new road couldn’t take the weight! She herself also has fond memories of seeing a family of squirrels and migrating swifts roost in its branches.