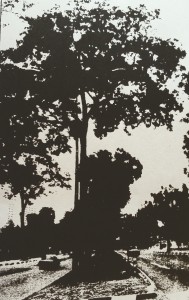 The Eugenia grandis, also known as the Sea Apple Tree or Jambu Air Laut (local name) is one species that cannot be killed by fire.

In fact, the Sea Apple tree was planted here even before Singapore gained independence. The British did this to cope with flammable plants such as the Lallang that covered many parts of the island back then. Some of these fire breaks are still around today. The one in the picture was taken at Stevens Road in 1993. Let us know the next time you spot one!