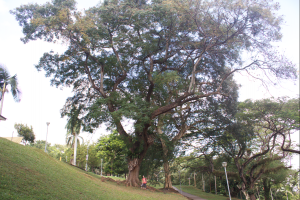 Yin Ying’s favourite is an old saga tree on Mount Emily. She used to go there after kindergarten ended and spent a lot of time collecting saga seeds, competing with her brother to see who could find the most.

“We dug around among the roots as if they were excavation sites,” she says. “For us, the most highly prized saga seeds were the oddballs: the strangely formed seeds with flat edges and yellow gradients. The red ones were common.”